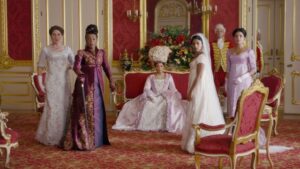 Right from the first joyous, rippling opening notes of Bridgerton, I am completely hooked. I adore the confiding gossipy tone of the latest society news from the whip smart pen of Lady Whistledown. Set in a time without Covid, war or the frantic technological pace of modern life, Bridgerton is simply a breath of fresh air. It’s an idealistic world of chivalry and romance, where the handsome hero smoulders longingly at the heroine and who doesn’t love a good old fashioned dose of unfulfilled desire and passion? That and the vibrant blue skies, the lavish flowers and ornate decorations, the satisfyingly pristine uniforms of the servants, the flamboyant houses, stunning rich brocades. The colours are so bright and uplifting, they are reminiscent of the glorious technicolour of 1940s Hollywood. We all need a bit of glamour and opulence as we face rapidly spiralling prices and exorbitant electricity bills. At a time when it’s still difficult to travel and in my case with four teenage daughters, two of whom have health conditions and a frail recently widowed Mum of eighty nine to worry about, it’s practically impossible. Bridgerton therefore like all good fiction, as Mason Cooley once wrote, ‘gives us some place to go when we have to stay where we are.’

And Shonda Rhimes’ production certainly provides that. It’s a heady eclectic mix of old and new with the Regency balls from Series Two featuring hits such as ‘Material Girl’ and ‘Dancing on my Own’ culminating in protagonists Lord Bridgerton and Miss Sharma dancing to a classical rendition of ‘Wrecking Ball.’ This decision is a progressive nod to the fact the show is not traditionalist. It stretches ideas. Yes, Regency romance is a hugely popular theme but the very diversity of Bridgerton is refreshing, inclusive and far from the reach of other traditional productions. In addition, matriarchal power is wielded throughout, by Queen Charlotte who rules in place of her husband due to his illness and she in her turn is controlled by the pen of Lady Whistledown. Both the Dowager Lady Brigerton and Lady Danbury are independent women, as they are widows of estates with large fortunes. The men by contrast are more emotional, less together, a refreshing portrayal indeed, especially within a genre which has long been criticized for being too obvious, for lacking in suspense or subtlety, as the reader or viewer always knows what is going to happen.

But that’s the whole point. After a truly traumatic start to this year, having witnessed my beloved Dad’s death from Covid, I welcome a fictional world where whatever happens; I know all will end well. Of course we are aware right from the beginning of Series Two that Lord Bridgerton and Miss Sharma will ultimately marry and live happily ever after. But dear Reader, it’s not the what, but the how that matters. We want to see how their story plays out, how they get together, who else that involves and how that affects them. In a society where everything is available instantly at the click of a button, the excitement of the slow burn is all the more satisfying. In any case, most fiction follows some kind of formula, in crime novels, you know that someone will be killed and the detective or whoever else will have to solve the murder. In Agatha Christie, there is a whole tradition of all the suspects gathering together in a room with Hercule Poirot, or Miss Marple to reveal the murderer. Besides romance can have unexpected elements, there are other subplots, which can yield all sorts of surprises. Yet romantic fiction is still tarnished with the quite frankly insulting label of being trashy or easy reading, predictable, not worthy of other literary genres!

I feel it is time we truly celebrate the power of this feel good fiction and affiliated television productions and that we acknowledge the overwhelming need for them. For those who are housebound, have long term conditions, for carers, caregivers, or for those who for whatever reason are struggling with or simply want refuge for a while from the difficulties of modern life, Bridgerton is a wonderful escape. What better testimony do we need than figures of over one hundred and ninety three million viewing hours for the second season already?

I first discovered Julia Quinn’s books over twenty years ago when I was a new Mum. This continued when I was parenting three little ones under four and during very hard times such as when my eldest was diagnosed with serious kidney disease. Often I would fall asleep reading in bed, as I was too busy and too tired to pick up a book at any other time. The exploits of the Bridgertons were always comfortingly reassuring. I love all the different characters of the various children and their stories. They almost feel like a second family.

And then there’s the sparkling witty repartee. I fell in love with Regency romance as an impressionable teenager, immersing myself in the wonderful works of Georgette Heyer. The cut and thrust of verbal swordplay between the hero and heroine. The comedic romp and complicated situations which arise from misunderstandings, eventually happily solved, never threatening or serious. The totally restrictive social backdrop that makes the slightest touch of a hand incredibly exciting. Where else are we to find such perfect romance? Certainly not from real life, with husbands who are exhausted with the daily drudge of work and family life and expect a standing ovation for emptying the dishwasher. Of course we do appreciate their help really. But much as we love our partners and children, we all deserve a little respite from reality, especially when things for so many have been so tough. Modern times can sometimes feel just a little lacking can’t they?

A bit of Bridgerton, with it’s stunning colour and sheer joyous distance from our own situation, is the prefect antidote to reality. And I for one applaud it. Maybe we should ask for it to be prescribed on the NHS? 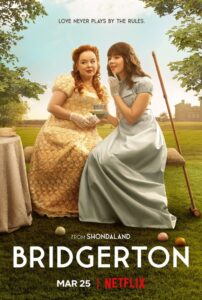 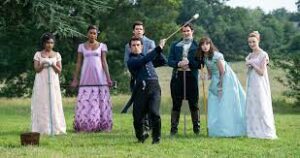 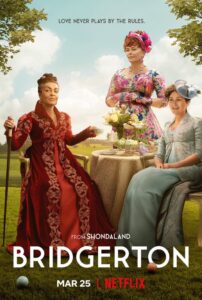